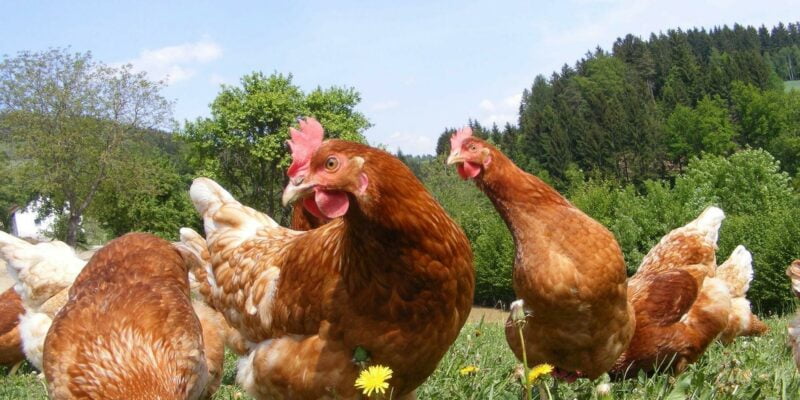 Farming can be highly profitable, and there will always be a demand for healthy, sustainably raised animal products. However, as a new farmer, raising animal flocks can be daunting since they require a great deal of care.

You shouldn’t be discouraged, though. You know farming takes considerable work, but there are several easy to raise animals that you can start with that will still bring in profits. This article will go over 8 of those so you can get an idea of what you can manage with what you have as a beginner.

Goats are extremely easy to raise and don’t require large acres of land for roaming. In addition, they can produce meat and milk. Therefore, you can use them for a variety of products. Plus, they’re strong, so they’re great for clearing out patches of foliage. Their strength can also be a downside, though. So you need to ensure that you have strong fencing in place to keep them contained.

Chickens may be one of the most profitable farm animals since they’re highly consumed. They produce meat and eggs, so if you have a flock of a few dozen, you may see a decent cash flow. However, they require feed, a clean water supply, adequate housing for severe weather, such as a mobile range coop, and nests to lay eggs.

When raising chickens, especially free-range, remember that they fall victim to predators easily. So it’s critical to keep a sturdy enclosure and a rooster or other large animals for protection. You also need to watch for overcrowding because if one chicken falls ill, the rest are bound to follow quickly.

Thanksgiving may be the most profitable season for Turkeys, so you should definitely take advantage of the opportunity. However, you can still make money on them year-round. They require some extra care initially, but it will be less maintenance once they mature.

Rabbits are quick meat producers. You can also breed them to sell as pets or to other farmers. Plus, they’re relatively low-maintenance even though they need daily oversight. But, to care for them properly, they require feed and water. In addition, you will need hutches for housing. So depending on the number of rabbits, you plan to breed, this can get pricey. However, you can build a hutch at a pretty low cost if you’re handy.

Compared to other livestock, sheep are one of the easiest animals to raise. They produce meat, milk, and wool, making them highly profitable. Plus, they’re inexpensive since they can survive off grass and water. Just ensure that you have adequate housing for them in inclement weather.

Housing is critical since sheep make easy prey for wild predators that wander near the farm. So keeping larger, compatible animals on the pasture can serve as an added layer of protection.

Raising cows requires a fair amount of land since they’re so big. So they’re not ideal for people working with anything less than 2 acres. They also require a significant investment since you need a decent pasture for grazing, an ample water supply, and a barn for cold weather.

Keep in mind that they’re going to produce large amounts of meat and milk, so they’re worth the investment. Plus, they’re relatively low-maintenance once you have everything set up.

Many people don’t consider honeybees when they think of farming. Bees don’t require a lot of your time, but they do require significant maintenance. However, you can use the honey they produce to make things like soap, lotion, chapstick, and honey butter. They require a decent start-up investment, but you’ll make the money back quickly. You’ll need supplies like bee suits, water, and hive boxes. They’ll travel for food, but you should save some honey for them just in case.

Pigs are stigmatized for being dirty, mainly because they like to roll in the mud. They do this to keep cool in the summer heat. However, you can avoid the smell and filth if you provide clean ways to cool off and allow them to roam the pasture. They are easy to care for, but they can get expensive since they eat so much food. However, you can cut costs significantly if you choose to free-range.

Being a new farmer is exciting and overwhelming all at once. You’re wise to start with easy-to-raise animals. Just make sure you don’t go overboard in terms of numbers. Otherwise, you’ll find yourself in over your head. Start small, and let them breed. This way, you can adjust naturally.

If you don’t have much land to work with, start with smaller animals like chickens and rabbits. Once you build a steady revenue, you can look into expanding your farm to accommodate larger animals.